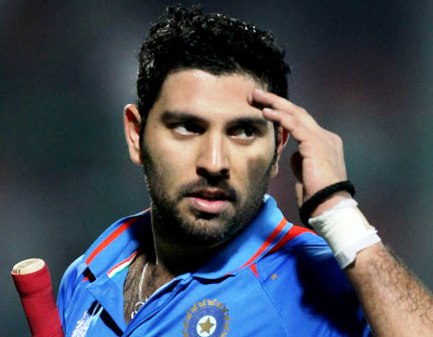 Yuvraj Singh is a man who does not need any introduction. An Indian International cricketer, Yuvraj was born on (12th December 1981) in Chandigarh, Punjab. He started playing cricket when he was 13 years old. He is the combination of girt and flair and showed an outstanding performance in the ICC under-19 World Cup of 1999 in which India had won. He began his career for the Indian International team in 2000 as an all-rounder who bats left-handed and bowls slow left arm orthodox. His debut ODI (One Day International) match was against Australia in which he was declared as the man of the match for his innings 84 (80). He performed splendidly and unleashed his batting virtuoso on the opposite team’s bowling attacks. He earned applause for his terrific performance and it was spectacle to witness when spectators were awestruck with his energy and strikes, especially when he was hitting every ball only to disappear into the crowds. After then he has been a shining star of theIndian International team. He played 373 matches so far, 40 test matches, 293 ODIs and 40 T20s. He had been the vice-captain of Indian ODI team 2007-2008.

He has been a magnificent player which he proved while playing against England. The ‘Six Sixes’ in ICC World Cup Twenty 20, is an indelible milestone in the history of 20th century cricket. Whenever we talk about Yuvraj, we always remember that fantastic moment in which he played so smoothly. After exchanging a few words with Flintoff he created history by hitting six sixes in a row. It seemed that it was in retaliation to a heated conversation between the two, which Flintoff would have regretted later. Never had it been witnessed to see six sixes delivered on six balls, an accomplishment  even Yuvraj had never thought of. His charm has been increased since then and Yuvraj became the most preferred choice. He was awarded the Man of the match of the tournament, 2007 ICC World Cup T20 with his famously hit six sixes in one over bowled by Broad. India eventually won the World Cup T20, 2007 and ICC World Cup 2011 subsequently.

In 2011, Yuvraj was diagnosed with a cancerous tumor in his left lung and underwent treatment (chemotherapy) in Boston, America. After his successful recovery from cancer, he returned to India in April and made his international comeback before 2012 World Cup T20 playing against New Zealand. Thereafter he was acknowledged as a role model for his courageous fight against the disease.

Yuvraj Singh was conferred with the Arjuna Award in 2011 by the President of India and the Padma Sri Award in 2014. His achievements and rewards are uncountable. He is the man known for the he possess and of course those unforgettable history of six incredible sixes in an over.