Home NEWS Government of Lebanon resigns after the explosion

The Beirut blast on August 4 led to nearly 200 deaths and more than 6000 injured. There has been protests and massive anger amongst the people.Thousands of protesters pelted stones in central Beirut where Lebanon’s parliament is located.

The recent explosion was caused  by 2,700 tonnes of ammonium nitrate stored for six years in a warehouse in the city’s port. There was a lot of anger and people wanted their government to answer. The civilians blamed the negligence of the government that led to such a massive explosion. 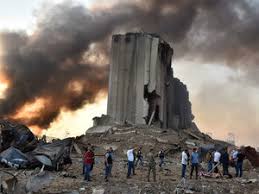 According to a BBC report, the Beirut explosion has caused damage worth $3 billion. There has been a series of protest in Beirut from 2019 people protested against the corruption the unstable economy, sectarian rule and unemployment The protests went for months and had to stop due to the mass spread of coronavirus. The closing of the sea ports and the standstill created due to the pandemic caused a further setback to an already beleaguered country.

Prime Minister Hassan Diab blamed endemic corruption for a devastating explosion last week that tore through the capital and stepped down as Lebanon’s government.