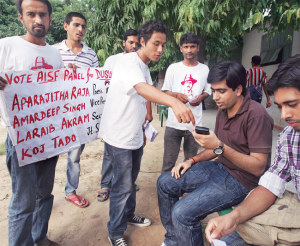 As we step into the college on our first day, no matter in what year you are, you will be receiving a warm welcome from a stranger or a group of strangers telling you their names and ballot numbers sometimes and that might leave you perplexed; what was it all about? Actually those people are candidates contesting DUSU elections and the welcome was to make sure you vote for them. And surprisingly most of our freshers are often clueless about how the the whole algorithm of DUSU elections works. It is not like other local elections there are a lot of differences that we can go on ranting out here but lets keep that out as we are discussing the insights here.

“The Delhi University Students Union, generally abbreviated as DUSU, is the umbrella student organization at the University of Delhi.

DUSU is the representative body of students from most Delhi University Colleges and Faculties. Each college also has its own students union to which elections are held every year. Student elections are keenly contested. Several of the office bearers of DUSU have gone on to hold public office at the State and Centre level.

DUSU elections are considered the most high profile student union elections in the country as they provide an opportunity to enter directly into local and national politics. Arun Jaitely, current finance minister, was a member of DUSU. The University of Delhi has a long history of student political activity.

The elections to Delhi University Students Union, formerly indirect through the electoral votes of college Councillors, are now held by direct voting by the students of the university and constituent colleges. The elections are usually held in August–September of each year.”

Every year around 5-6 major political parties including NSUI (Mentored by INC), ABVP (Mentored by RSS) and AISA contest for the post of President, Vice-President, Secretary  and Joint Secretary. Apart from DUSU elections you will also be voting for your college President, Vice-President, Secretary, and two College Captains, who will be taking care of the students affairs at the college level. DUSU panel looks after the overall student rights phenomenon at university level and the college panel would take care of fests and other activities in your college. It is an amazing platform that comes as a luxury for DU students who want to pursue local politics as a career.

The fun part here for all of us is that the contestants would do all the tic-tack tricks to lure you into voting for them, you will be offered free movie tickets, picnics, rides, booze and what not? even you might go bonkers about the choices that will be offered to you in exchange of votes. Most of us would obviously flush away or morals and dive into the perks offered. You would also get astonished seeing flyers and posters decorating the whole city, which would be a little more than the usual election campaigning mess (Not a pleasant sight for Eco-friendly guys out there). 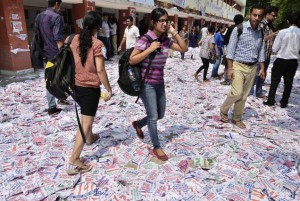 There will be cars roaring around the colleges and campuses with the advertisements stuck on them, rickshaw-wallahs, auto-wallahs and all those daily “wallahs” would seem as if they are parroting the name of a contestant. Strange part is there is less of promises or debates but there will be names and just names everywhere. Beware you might get one pasted on your face, it is highly recommended to not to indulge into any feud leading to some legal action against you. Despite of all hooliganism, money-muscle showdown and littering the atmosphere is one of its own kind. You might not find the similar conditions anywhere else in the country, anyway DUSU elections are one of the most anticipated elections of the country.

It would be a great treat to enjoy yourselves with all those perks and handsome offerings but it is always advised to vote for the right candidate. You remember it is we who always blame the government?

Don’t miss your chance to share your views on the issues that matter to you in the DUSU Election 2015 with our simple survey: