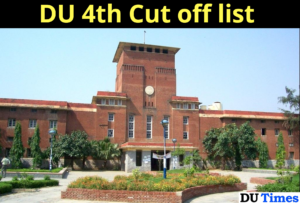 Out of the 56,000 total seats available in DU colleges, as many as 44,700 seats were filled by the end of admissions under the third cut-off list.

Only about 20% undergraduate seats are left for admissions at Delhi University colleges under the fourth cut-off list.

The drop in cut-offs for many courses ranged from 0.25 to 0.50 percentage points and for many others it remained same as the third list.

While popular courses at colleges were taken, there were a few seats left at some colleges that saw a marginal decrease in the cut-off required.Admissions to some colleges have re-opened. The admission dates under fourth list are 6th to 9th July except on 8th.