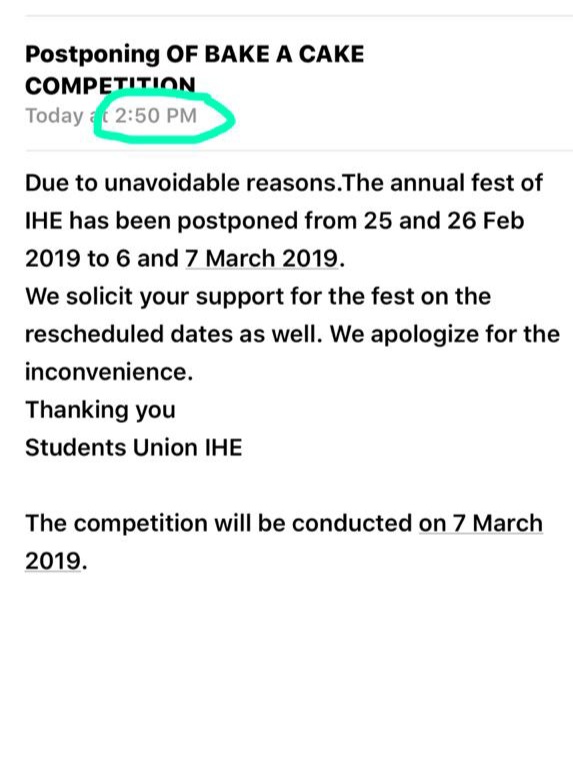 As mentioned about the instructions in the form, the students were required to bake and present in the college and were to be judged based on taste and presentation.
One of the participant,  Shaurya Aggarwal from Lakshmibai College claimed that “As we reached halfway and had to inquire about some technical thing so we called up the respective number being informed at that moment it has been postponed. There was no notification given to the contestants regarding the same. This is lethargic of the student committee and the organisation failing to inform a minimal thing hence disrespecting their hardwork. We want a compensation for the same as this is a high level of utter ignorance and unprofessionalism. We beg to differ the fact to let it go as zealing efforts were put into this by us and other teams as well. This is disgraceful for the organising committee to play out with people’s toil. “
However,  other disheartened participants claimed that they received a mail regarding postponement of competition at 2:50pm while the competition was supposed to start at 3 pm which apparently is an inappropriate time to be informed.
On the other hand, Yashika, the President IHE Student’s Union take said “We tried calling participants or mailing them in the morning only but due to bad network issues it got delivered that late n i believe if its an issue we should be the one they should contact and work this out with we even asked whoever has reached to pls reach college and submit their cakes.”
According to her, “we tried our best to help and rectify the situation, because it was something that was beyond our control and our first one of kind event  that was hosted and we faced some genuine issues due to which it was postponed last minute.”
Lastly,  she added, ” We are ready to take on the responsibilty and help we would need that support from fellow mates. We believe that if someone postpone all their hardwork their must be a strong reason backing it.  So we could have only hoped that participants would understand too.”