Many people throughout India celebrate the nation’s Republic Day, which is a gazetted holiday on January 26 each year. Republic day honours the day when the Constitution of India came into effect. after gaining independence from the British Raj on August 15, 1947, it was January 26, 1950 when the Government of India Act was replaced as the governing document of India. After the Constitution of India came into effect, India became a federal, democratic republic within the commonwealth, abolishing monarchy. 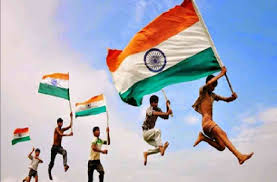 Why was January 26 picked as the day of the constitution?

In 1929, during the Lahore Session of the Indian National Congress, where Jawaharlal Nehru was elected as the president, a resolution was passed demanding complete independence. 26 January in 1930 was declared as the “Purna Swaraj Diwas” or Independence Day. But the demand wasn’t met until 1947. Hence, to honour the significance of the first Independence Day, members of the constituent assembly decided to enforce the constitution on January 26, marking it as Republic Day.

How is it celebrated? 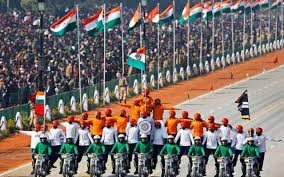 Much effort is put towards organizing events and celebrations that occur on Republic Day in India. Large military parades are held in New Delhi and the state capitals. Representatives of the Indian Army, Navy and Air Force and traditional dance troupes take part in the parades.

Awards and medals of bravery are given to the people from the armed forces and also to civilians. Helicopters from the armed forces then fly past the parade area showering rose petals on the audience. School children also participate in the parade by dancing and singing patriotic songs. Armed Forces personnel also showcase motorcycle rides. The parade concludes with a “fly past” by the Indian Air Force, which involves fighter planes of flying past the dais, symbolically saluting the president. These leave trails of smoke in the colors of the Indian flag.

How are we celebrating our 70th republic day ? 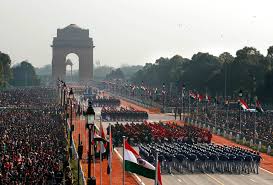 2019 celebration is special as this year will mark the 150th birth anniversary of ‘Father of the Nation’. Around 17 tableaux from states/Union Territories and 6 from various ministries are displayed in the parade based on the theme ‘Gandhi’.  A tableau also showcase ‘Mahatma Gandhi Kashi Vidyapeeth’ which is a historical educational institution situated in Varanasi moreover the tableau display the glory of Ghats, Buddhist Monks, rituals and ancient temples of Varanasi. 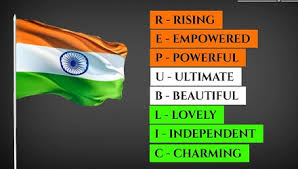 Republic Day represents the true spirit of the independent India. Military parades, displays of military equipment and the national flag are important symbols on this date. India’s national flag is a horizontal tricolor of deep saffron (kesaria) at the top, white in the middle and dark green at the bottom in equal proportion. The ratio of the flag’s width to its length is two to three. A navy-blue wheel in the center of the white band represents the chakra. Its design is that of the wheel which appears on the abacus of the Sarnath Lion Capital of Ashoka. Its diameter approximates to the white band’s width and it has 24 spokes.