Home ADMISSION 26,291 admissions and 3,203 cancellations after 2nd cut off 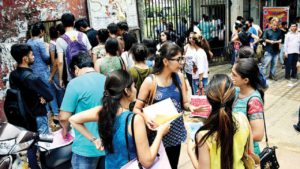 More than 5,000 students took admission in various colleges under DU, a day after the second cut-off lists were released. Unlike first cut-off’s first day, the admission process was carried out smoothly without any technical glitches or any other issues after the release of the second list. Over 15,000 admissions took place during the three days after the first cut-off lists were released. However, 2,388 students cancelled admissions, officials said.

According to an official from the university, 2,78,544 aspirants have made payments.Last year, around 2.20 lakh candidates had made payments.

The third cut-off list will be released on June 30 and admissions will take place between June 30 and July 3 except on Sunday.

All the best aspirants !