Last day, we celebrated the world enviornment day with the theme ‘Biodiversity’ that is being celebrated on June 5 every year since 1974. And it was around last week, we observed the painful demise of a pregnant elephant allegedly due to eating a pineapple filled with fire crackers.

The incident reminded us of the growing conflicts between humans and animals which are probably going to rise in future as well due to our thriving selfish commercial interests.

Union Environment Minister Prakash Javadekar tweeted citing the incident and said, “Central Government has taken a very serious note of the killing of an elephant in Mallapuram, #Kerala. We will not leave any stone unturned to investigate properly and nab the culprit(s). This is not an Indian culture to feed fire crackers and kill.” 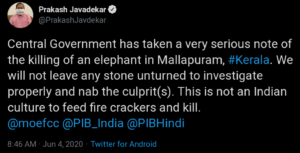 The prime reason behind such incidents are the shrinking ranges and the feeding grounds for elephants as the animals look for soft landscapes adjoining forests such as coffee, tea and cardamom estates, and in the absence of these they move into food-rich farms falling in their movement pathways which may cause their death.

On the last day itself it was reported that one person has been arrested in connection with the case and, two are in custody, but this may do little to mitigate the environmental challenges before us particularly relating with human-wild-life conflicts. The larger issue of lost ranges and blocked corridors for these animals remains before us which can only be resolved through following the path of sustainable development.

However, this does not mean nothing has been done in this direction. India Project for Animals and Nature in Masinagudi organised a programme to adopt ponies. IPAN is home to over 200 rescued animals. These include donkeys, ponies, horses, dogs, cattle, buffaloes, goats, sheep and a lone cat. Trunk Call Foundation in Maharashtra has raised ₹1.5 lakh for the affected elephants in Thailand. (Source: The Hindu)

In the end let’s recall Buddha’s quote; “All sufferings is caused by ignorance. People inflict pain on others in the selfish pursuit of their own happiness or satisfaction.”