With a bowl of popcorn, I curled up on my couch to watch Inkaar. Half an hour passed by. I almost dozed off. But I made up my mind to watch this one. With a great deal of effort of keeping my heavy eyes wide open, I finished watching it. And bam! What did I just watch? Arjun Rampal’s hotness failed to cast charms too! The title of the film is an inadvertent take on the film.

Sudhir Mishra’s ‘Inkaar’ bears the intense, profound and strong theme of sexual harassment at workplace. A great and impact-full story could have been spun about it.

The story telling drags in more places than one and after a certain point of time, one does feel that the story is heading nowhere. Inkaar could have been so much more. It turns out to be nothing more than a hodgepodge, perhaps further complicated with its poor and flawed editing. One even feels confused whether the scene being shown is a flashback or a present one. And why the hell did Mishra incorporate some slow motioned scenes, is still to be figured out! This does nothing, but merely complicates the already concocted mishmash.

Chitrangada Singh is vivacious and the dusky beauty looks drop dead gorgeous throughout the movie, but only had she cared to act! Her expressions are cold and same throughout. It is difficult to comprehend in certain scenes if she’s smiling or sulking or smirking. Chitrangada’s Maya is a victim of harassment but she never looks oppressed. Neither do we feel sympathetic for her, not even momentarily. She never looks helpless but a paradigmatic glam diva for whom being trendy tops her priority list. Your heart will never go out to her. Her demeanor doesn’t evoke any kind of sympathy or pathos from within for her! [PS: Appearing like a fashion queen always doesn’t work, lady!]

Arjun looks like a quintessential debonair with a highbrow sense of fashion, but his acting skills deceive him yet again. He is too introvert and taciturn as an actor. He never allows himself to flow and open up. Dude, underplaying always doesn’t work! He had a colossal potential to display his expertise and proficiency as an actor, but he restrains himself. 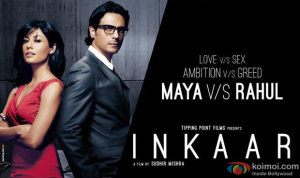 There’s simply no chemistry between the lead pair. There’s a scene towards the end where Maya indulges in an emotional outburst. The scene could have had so much of impact but alas, their expressions betrayed them! They speak so many things and indulge in a very intense conversation, but they seem too cold and inanimate. The slow motions and those conversations in the form of whispers do nothing but merely ruin the scene. [PS: Whispers do not always work in creating a maudlin aura!] In fact, this is one scene which brings the film (read ‘fiasco’) crashing down because this is the scene where they confess their love for each other. Oh! Give us a break! If it was love, then why the hell was the issue of sexual harassment brought in between?! Why did an adept like Mishra dig his own grave?! If it was all about love, then why did you torment us for the last 120 minutes with this dud called Inkaar?! Clearly, everyone associated with the film was confused and so will the audience be.

Arjun’s Rahul plays a confident and cocky CEO in the film. So many events have had taken place in the last two hours that would have pulled down his confidence to the base level, but he retains his confidence and resilience throughout… but when Maya confesses her love for him, he vanishes all of a sudden leaving behind an email for his colleagues and Maya and off he drives to his home town Saharanpur leaving behind everything, leaving behind his job. Now where is your intangible confidence, man? Why did your confidence fade away all of a sudden? And the reason of his going back to Saharanpur? No, not for the search of Nirvana. He suddenly remembers a lesson given by his dad to him that when someone speaks against you, always support that person and try to find out what made that person speak against you. And so in search of what actually made Maya file a case of sexual harassment against him, he goes off to Saharanpur. And bimbo Maya also escapes somewhere abandoning her dream job and her mobile phone. Where did she go? Why did she go? The answer is as vague to us as it is to Mishra (we guess)! Quaint, bizarre, uncanny!!!

Deepti Naval has been wasted completely. She just sits down and does nothing more than playing an advocate who patiently listens to Maya and Rahul and ultimately turns perplexed (just like us) whether Maya is speaking the truth or Rahul. 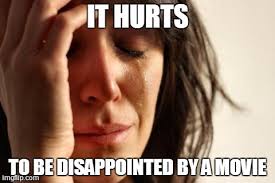 Even the songs are worth forgetting. After you leave the theater, not even a single song will stay in your head except of course ‘Maula Tu Malik Hai’ owing to the fact that they play the song continually in all the music channels! All the songs sound similar. You will not be able to distinguish whether they play different songs every time or are they the stanzas of one single song. The title track initially sounds promising but subsequently, it falls flat. When you leave the theater, you will have a mixed expression of sulk-smile-smirk on your face much like our protagonist Maya. Well, the smile will be that of consolation for ourselves, and of course as applause to our courage for bearing Inkaar!

After you’re done with the film, you will have innumerable questions popping up in your head. Why is the picturization so dull and insipid? Were the people at the editing table really that confused? Why did they not treat themselves with a better cinematography? What was the purpose of slow motioned scenes in between? Why did they not compose some better songs that would have concealed the other technical and artistic follies and flaws to some extent? Why this levity? Why did Mishra even bother to direct such a non-substantial and shallow movie? But the question that haunts us the most is what happens to the case that was filed in the film now that both the accused and the victim flee and everyone is left bewildered?

Spare yourselves and say NO to Inkaar. You will be a happier person. Do not over-stress or frustrate yourselves. Inkaar is like a swat on our faces. Phew!