As every Story has a Villain,so does our “Desi Villains of Videshi Festival” has…Yah You Guessed it Right! I am Talking about Hindu Mahasabha and The day of Love,Valentine’s Day 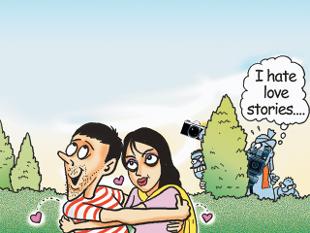 Hindu Mahasabha on Friday said their volunteers would have couples sliced up if found in an act of indecent display of love in public space. With white roses in their hands volunteers would be on the prowl in parks,movie theaters,restaurants and other public places across the city with their targets would be the couples expressing Love for each other in three words I Love You or Found Locked in Embrace, defined  as “Indecent” by Hindu Mahasabha President , Chandra Prakash Kaushik.
He said his trained volunteers would accost such couples and teach them the real meaning of Love, persuading to “Marry Each Other”.

He further added “We are not enemy of Love. The indecent Expression of Love in public places is what we object to “.
Meanwhile  Youth is Undaunted. They warm up to celebrate Love with colorful gifts and red roses.

On Facebook “Sudh Desi Romance -Everyone weds Anyone” that a couple of smiling men in saffron with a tagline-“Get Ready to marry”openly invites struggling Lovers to Hindu Mahasabha office .
On the other hand it cut no ice with the University Students. JNU Students’ Union dared the Mahasabha to marry an intercaste couple or gay.
NSUI is also in the league. The students wing of Congress organized a “Love parade” followed by a street play on the valentines day eve in Delhi University to celebrate the spirit of Love and Unity and distributed chocolates and roses to the students who joined in.