On July 12, London, ever since England’s defeat in the Euro 2020 final, black players in the team were subjected to a barrage of racist online abuse, prompting widespread condemnation from the squad’s captain, manager, royalty, religious leaders, and politicians. Marcus Rashford, 23, Jadon Sancho, 21, and Bukayo Saka, 19, were the targets of abuse after missing penalty kicks in a penalty shootout with Italy that decided Sunday’s final after the game finished 1-1.

On social media, the three were bombarded with “offensive and racist” posts. Many well-known public personalities have criticised the outpouring of hatred, and the Metropolitan Police has confirmed it is looking into at least some of the social media. 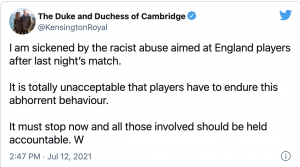 William, who is the president of the Football Association, tweeted on the Duke and Duchess of Cambridge’s official Twitter account Monday morning, “It is utterly unacceptable that players have to endure this repulsive behaviour.” “It must stop now, and all those involved must be held accountable,” he wrote, signing off with a “W” for William.

Many have praised William for his comments about racism in soccer, but many have criticised him for not publicly defending his biracial sister-in-law Meghan Markle from sexist and racist abuse she has faced both online and offline.

The players’ union, the Professional Footballers’ Association, stated that “When you abuse any of our players, you abuse all of us. Racist abuse causes trauma. It will impact the targeted players, their teammates, and we know it will also affect their peers”. A mural in Manchester, England, depicting Rashford and celebrating his charitable work was defaced in a “racially aggravated” manner, according to police.

The harassment was described as “unforgivable” by England’s national team coach, Gareth Southgate. “It’s not what we stand for,” Southgate said at a press conference on Monday, applauding Rashford, Sancho, and Saka’s performances. “We’re healing as a team now, and we’re there for them, and I know 99 per cent of the audience will be, too, because they’ll recognise how brilliantly they performed.”

Following England’s highly televised loss to Italy in the Euro 2020 final on Sunday, British Prime Minister Boris Johnson criticised racial abuse directed at several of the team’s Black players. At a news conference later that evening, Johnson expressed his desire that those who perpetrated abuse would “crawl back under the rock from which you emerged.”Since the game, none of the three players involved has made any public statements.

According to Musa Okwonga, an English soccer journalist of the Stadio football podcast, after the game, the abuse began. She quoted “Hate is a strong word. But the racist relying on black English footballers to bring them glory as if they were their servants, then turning on them as soon as they fell short of their dreams, have my deepest contempt”.

Racism has long plagued English players, and many have spoken out about it in recent years, including Rashford, who this year called racist abuse from soccer fans “humanity and social media at its worst.” During this year’s Euro tournament, England’s team took a knee before games to protest racial inequality, much to the chagrin of some fans.