The International Buddhist Confederation (IBC), under the aegis of Ministry of Culture, Government of India, is celebrating Asadha Poornima on July 4, 2020. The day will be celebrated as Dharma Chakra Day.

This day commemorates the Buddha’s first sermon to his five ascetic disciples. It was given at the Deer Park, Isipatana in the present day Sarnath near Varanasi, Uttar Pradesh.

PM Narendra Modi will address the celebration of Dharma Chakra Day/Asadha Poornima today. He shall deliver a video on the occasion to emphasis on the teachings of the Lord Buddha and the eight fold path shown by him to overcome the sufferings of the sentient folks. President Ram Nath Kovind shall inaugurate the Dharma Chakra Day from the Rashtrapati Bhawan. 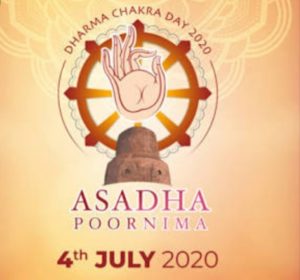 Moreover, a centuries old Buddhist manuscript of Indian origin preserved in the Mongolia shall be presented to the President, Ram Nath Kovind.

The top Buddhist scholars and masters from all over the world will give their messages on the day that will be streamed from the Bodh Gaya and the Sarnath.

Dharma Chakra Day is also recognised as Dharma Chakra Parvattana Or “Turning the Wheel of the Dharma”. It has eternal importance amongst the Buddhists all over the world. Buddhists celebrate it in a way that is no less than a festival.

The day gains it’s significance among the hindus as well. They celebrate it as a “guru poornima”. On this day people mark reverence to their gurus.