A salute to the indomitable spirit of Chennai! This unflinching determination to save the fellow-beings of Chennai restores one’s faith in the goodness of humanity. After being hit hard by the cataclysmic event of incessant rains and flooding, Chennai people are restoring themselves to normalcy. Around 19,500 citizens are rescued by Indian Army, putting in 40 rescue and relief teams (Source: Economic Times) for helping the most critical areas in Chennai. Since the ominous dark clouds have passed, the whole city makes effort to begin with a great gusto; opening of schools, offices and various institutions. University examinations which were postponed will possibly start in the month of January. The high prices of the commodities have also been reduced to a certain extent. The volunteers in Chennai are actively working to distribute relief material being stored at Jawaharlal Nehru Indoor Stadium. Once the rescue and relief operations are completed, the infrastructure and the construction activities have to be inspected, as the downpour has shaken the foundation of many edifices and bridges. This event has raised a number of questions regarding the role of government who initially remained absent during the rescue operations. Accolades to all the volunteers who coordinated efficiently to help the needy! 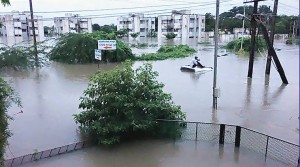 So, what lessons do we learn from the crisis? Let’s find out.