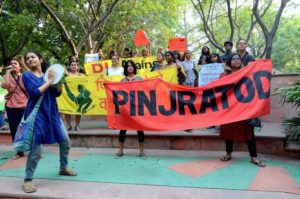 Natasha and Devangana belong to Pinjra Tod (Break the Cage) group, a collective of women students and alumni of colleges from across Delhi. The group had allegedly organised the anti-Citizenship Amendment Act (CAA) protest under the Jaffrabad Metro bridge.

The group had allegedly organised the anti-Citizenship Amendment Act (CAA) protest under the Jaffrabad Metro Station on Pink Line.

In a statement, the group said the police gave no reason to the families of the two women who were arrested.

“Many students and activists have been arrested by the Delhi Police in the last couple of months,” it said.

“We strongly condemn the witch hunt of democratic activists and students being carried out by the state and appeal to the student community and all democratic minded citizens to remain vigilant and strong in our struggles in face of this repression,” the group further said.

The protest lead breaking out of communal clashes  in northeast Delhi following the violence between the supporters and protesters of the Citizenship Amendment Act (CAA). The riots, that lasted for more than three days, left at least 53 people dead and 200 others injured.