‘The wave’ led the new right wing govt. into complete majority and also led the nation into a complete disaster as opposed to what was expected from the govt. everyday we are scared of reading news because there may be another ban or hike waiting to be read by us, the newspapers these days are filled with news of bans, threat to minorities, attacks on minorities, price hikes and so on. The nation is for sure facing the dark times with bone cracking price hike in everything and a large numbers of ‘Bans’ every here and then. So here comes another ban to continue the Ban-Drive here comes another ban request from ABVP(Right-wing) led DUSU. As they have openly waged a war against whatever to them seems Non-Hindu or ‘other’ than Hindu, this time the target of folly is ‘Ankur’ the theatre society of SGTB Khalsa College.

DUSU Joint-Secretary Ashutosh Mathur has sent a letter to the college authorities of SGTB Khalsa College, University of Delhi, on account of their streeet play  titled as ‘Welcome to the Machine’ which atctually probes the politics polarization in the country of which we are all pretty much aware of. And it is worth noticing in the letter that it says “FAKE BAN PROTEST” the language used here shows the superficiality of understanding of people given ‘authority’ or otherwise their wisdom is much beyond the comprehension of common men. It is a matter of great concern to have such language used by the students union which is meant to safeguard the interest of students. They are indeed threatening the freedom of speech of the students. Well it is though pretty much common to see the right-wing’s indigestion towards freedom of speech.

Delhi University has always been a democratic space and always will be as long as we continue to strive for it, keeping this in mind the students in the university have condemned such an action from people who hold responsibility to secure the rights of students. The Theatre Society of SGTB Khalsa College has said that “We condemn this craven act and urge theatre fraternity, academics and students to support us, as we move ahead from here” 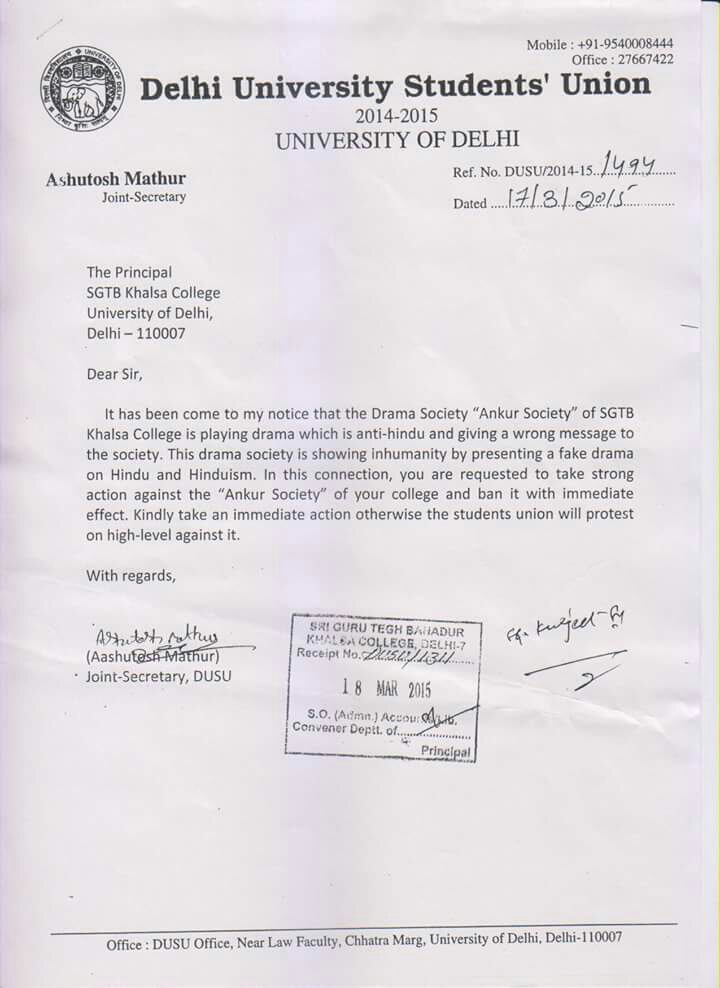